Tories in South Glos have backtracked on their key manifesto pledge for free green bin collections.

The Tory manifesto contained a page of pledges. The second on the list was to phase out green bin charges in South Glos. At the council’s Policy & Resources committee today, Liberal Democrat Cllr Claire Young (Westerleigh) asked what the level of the fee would be next year. The answer came back: “£36”, no reduction on this year.

Claire Young said: “The Tories have been wriggling for months and have finally confirmed what we knew all along. The council can’t afford to scrap this charge. The Tories have known it for as long as we have, but they chose to tell residents it was possible. They pretended that it would be low cost, affordable, and their priority. Either they were misleading themselves or misleading residents for the election.”

“Local Tory MP Luke Hall has deleted the page on his website calling for the charge to be scrapped – not only have they broken their promise, they’re trying to pretend they never made it in the first place. Local people will not be fooled. The Tories need to come clean. Why did they pretend they were going to be able to do something they knew simply wasn’t going to happen?” 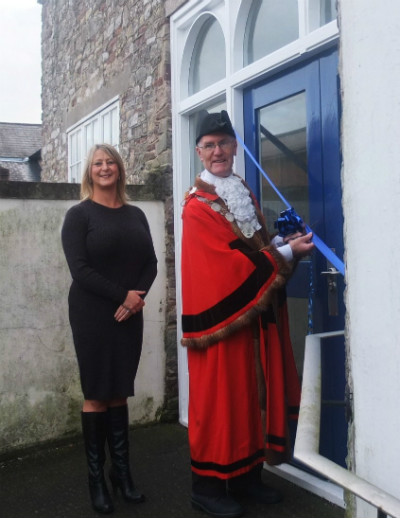 Thornbury Citizens Advice Bureau has re-opened again after its refit. Their suite of rooms at the back of the Town Hall has been rearranged. By reducing the size of their waiting room, space has made to create an entirely separate Police Office. The police themselves are expected move in by Christmas.

Thornbury Mayor and Lib Dem Town Councillor Guy Rawlinson cut the ribbon for the CAB on 1st December. “I am delighted that the CAB will continue its excellent work here,” he said. “And I’m also extremely pleased that the Town Hall will now be home to a permanent Police Office, and so retain a permanent police presence in Thornbury.”

If urgent you can use the same number to make an appointment at another South Glos CAB office with different opening hours.

Over one hundred local people from across the Thornbury and Yate area met in Thornbury to celebrate a big influx of new members to the local Liberal Democrats.

A thank you from Steve Webb

A big thank you to everyone for their generous comments on Facebook and Twitter, and especially to the 18,400 local people who wanted me as their local MP - unfortunately not quite enough. It has been a privilege to serve our area for the last 18 years in Parliament.

Public hustings: hear Steve and the other candidates debate

What happened when young people got to hear all the candidates for the election?

At the start of the General Election campaign the five candidates for this constituency took part in their first ‘hustings’ meeting. Young people attending sixth forms across Yate and Chipping Sodbury, and voting for the first time at this General Election, organised a meeting at Yate International Academy, attended by over 100 sixth formers. What was THEIR verdict on all the candidates for this seat after quizzing them?