Young people join in the debate in Yate 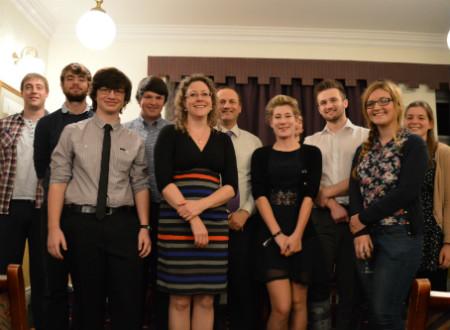 The visiting speaker was Cardiff Central MP and Government minister, Jenny Willott, who was first elected to Parliament at the age of 31, and at the time was one of the youngest MPs in the country.  In addition, the meeting also heard from Eva Lily Fielding, aged 20, from Alveston, and Liam Monsell, also aged 20, from Thornbury who explained how young people see politics and why they believe it is important for them to get involved.  Jenny Willott talked about her experiences of campaigning as an MP in a university town with a predominantly young electorate, and the need to make political campaigning fun and a social activity as well as tackling serious issues.  The meeting featured a lively question-and-answer session where a number of people said that they felt that schools were not doing enough to prepare young people to understand politics and how government works.  A number of the young people who attended the meeting were already members of the local Liberal Democrats and others joined on the night.

The meeting was chaired by Thornbury and Yate MP Steve Webb who said, after the event,

“It was great to hear not only from a fellow MP but also from local young people about their passion for getting involved in politics.   Although we keep hearing that young people are not interested, I find that many local young people care very strongly about a range of issues, from the very local to the global.   I think that politicians have sometimes put people off from getting involved when instead we should be making it easier for people to try to change things”.

The meeting was organised by the local Liberal Democrats as part of an annual series of events in memory of former Avon County Councillor, Heather Larkins, which raises funds to enable a local young person to attend the Lib Dem conference and learn more about politics.