Breakfast TV star John Stapleton and model ‘Twiggy’ have joined forces with local MP Steve Webb to promote positive attitudes to older workers.   The two celebrities spoke at a Parliamentary launch (Wednesday 11th March) hosted by the MP who is also the Minister of State for Pensions. 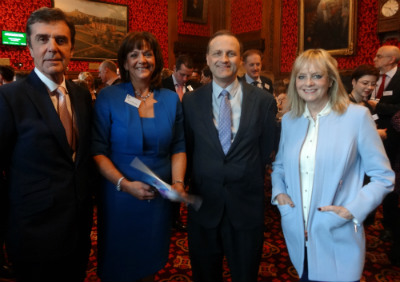 The reception was held to launch a report by the Government’s ‘Business Champion for Older Workers’, Dr Ros Altmann, which made recommendations for how government, businesses and the media could to more to help people over 50 remain in work and overcome negative attitudes.  A task force of employers has been set up who are leading the way on making the most of their older workforce and the aim is to spread good practice amongst other firms.  At the reception, John Stapleton highlighted the way in which the media in particular tend to discriminate against older women, with very fewer older women presenters on screen.  Twiggy talked about not seeing age as a barrier and the importance of keeping active in later life.

Earlier in the week, Steve Webb and Dr Altmann visited National Express at Heathrow where they heard about a plan to launch ‘open apprenticeships’ targeted particularly at the over 50s.  The visitors heard how the oldest worker who was aged 78 worked happily alongside teenage apprentices with each able to learn from each other.

“When you hear someone such as Twiggy or John Stapleton talking about their continuing work, you can quickly see that it is simply impossible to generalise about people on the basis of their age.  I hear too often from local people who have found it hard to get a job if they become unemployed over the age of fifty, and many say that they encounter age discrimination.  On the other hand, many businesses have realised that if they do not recruit and retain older workers then they are losing out on a skilled and experienced workforce.  Our challenge is to make sure that all employers live up to the standards of the best”.