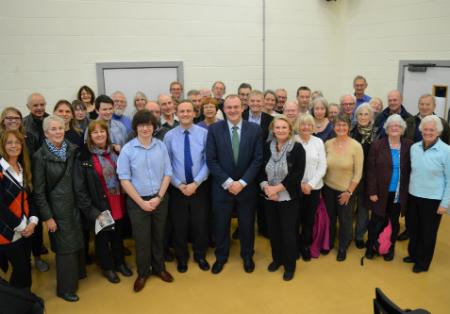 The packed public meeting at Turnberries Community Centre was organised by local MP Steve Webb and gave local people chance to hear the latest news on the international negotiations on climate change, as well as the latest measures being taken by the Government to tackle this long-term challenge.  There was wide-ranging discussion and a lively question-and-answer session on issues such as UK energy policy and the scope to get other big polluting countries such as the USA and China to take action in their own countries.   Many people commented that they were encouraged to hear of the progress that is being made and welcomed the chance to quiz a senior minister face-to-face about the need for effective action on climate change.

“I was delighted to see so many people of a wide range of ages willing to spend their Saturday afternoon thinking about a big long term issue like climate change.   I know from my mailbag that many local people want to play their part and it was good to give them chance to raise their concerns with my colleague Edward Davey”.

“I was impressed by the level of commitment to tackling climate change that I found among Thornbury residents.   We had a very worthwhile debate about the next steps in the battle against climate change, and I am encouraged to see that so many local people care passionately about this issue”.