A charity concert held in Thornbury on Saturday (5th April) has raised over £230 for the National Autistic Society (NAS).   The concert was organised by Thornbury resident Gemma Cao, who as well as working for the NAS in Alveston is also an accomplished clarinet player and teacher. 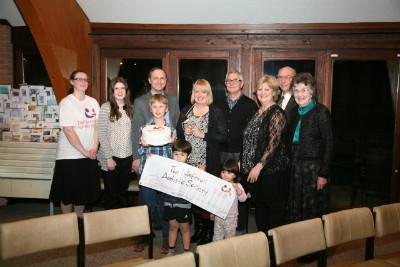 Gemma organised the concert along with friends and family to raise funds and awareness of Autism.   The concert featured performers of all ages, including nine year-old Timothy Mitchell, who played a recorder duet with his mother Jane, a piano solo and a clarinet piece.   Other performers included school student Alice Hunt who performed an oboe piece and singer Louise Hambley-Smith who joined Gemma and local pianist Olwen Wonnacott in a grand finale.   Around fifty local people came along to Thornbury Baptist Church for the concert, including local MP Steve Webb who welcomed the audience at the start.

Speaking after the event, Steve said:

“I congratulate Gemma on putting together this concert and for raising such a worthwhile sum.   I’m also grateful to local businesses who donated raffle prizes and to everyone who took part to make it such an enjoyable evening – we clearly have a lot of musical talent in Thornbury!”.