Save Our Green Spaces 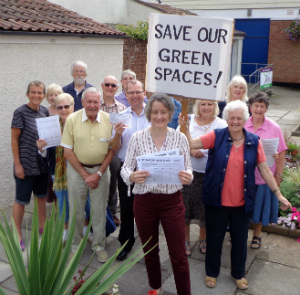 I am delighted to announce that the open spaces we have been fighting to protect in Thornbury and Alveston will now be put forward for protection from development.

Conservative-run South Gloucestershire Council had previously refused to include the greens it owns at Streamleaze and Osprey Park in Thornbury and Down Road, Alveston on a list of sites being proposed for designation as Local Green Space. This despite Thornbury Town Council agreeing to the ones it owns being protected in this way.

Over the summer, my Lib Dem colleagues and I have been out and about collecting signatures on our petition to save these spaces. A huge thank you to the nearly 400 people who took the trouble to sign. We handed this petition into South Gloucestershire Council yesterday.