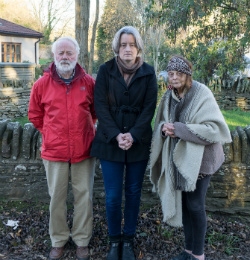 Planners have now revealed that some of the 2,600 homes proposed around Yate in a housing plan for the West of England could swallow up Nibley.

We were told repeatedly there wouldn’t be any more details of where the houses would go until the consultation on the new Local Plan later next year. Yet when Claire went to a drop-in at Chipping Sodbury Town Hall there were maps with black lines dividing up the countryside round our communities and comments on where had potential for development. Claire challenged the Leader of Council on this at a meeting and was told he wasn’t even aware of the maps!

The comments for Yate included: ‘…there is considered potential in a broad band sweeping from fields north of Yate Town Football Club & south of Mission Road around to the B4059 and turning south to Nibley Lane and the river Frome and continuing south across the Badminton Road including fields west of the Business Park’.

This would completely change the character of Nibley.

Please take our survey here to give your views