Minister of the Year

Thornbury & Yate MP Steve Webb has this week won a prestigious national award for his work as Minister of State for Pensions since 2010. The MP was voted ‘Minister of the Year’ by a panel of judges at the annual Spectator ‘Parliamentarian of the Year’ awards. 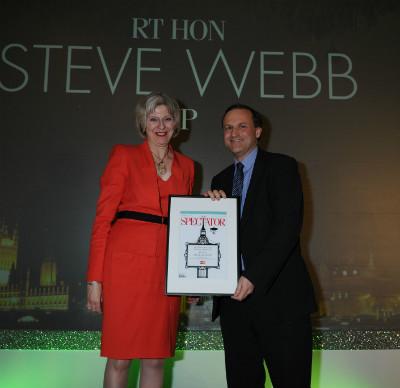 The judges praised the Lib Dem MP for his work on introducing a new simpler state pension system, for overseeing the enrolment of millions of new workers into workplace pensions and for his part in the new freedoms announced in the Budget which allow people to spend their pension pot however they wish. The award was presented by the Home Secretary Theresa May.

“I am greatly honoured to receive this award. It has been a privilege to be able to serve throughout this Parliament as Minister for Pensions. I have been able to introduce changes which will finally bring about a fairer pensions system for millions of women and self-employed people, as well as making sure that millions more people are now building up a pension of their own while they are in work”.

The MP has also been commended for maintaining a high standard of service to his local constituents alongside his work as a minister, having recently been ranked in the top 10 MPs in the country for responding promptly to constituents by e-mail.

Other award-winners at the event included Conservative MP William Hague for a lifetime of achievement and Labour MP Jim Murphy for his ‘soapbox’ tour during the Scottish referendum campaign.