A meeting held on Thursday (5th February) has been hailed as a ‘breakthrough’ by local MP Steve Webb in the campaign for modern healthcare facilities on the Thornbury Hospital site. 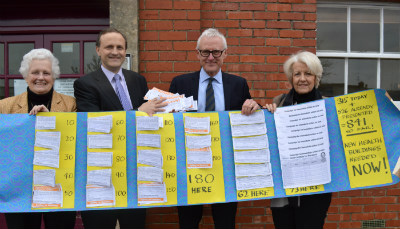 The summit was jointly hosted by Steve Webb and by visiting health minister Norman Lamb MP and was attended by chief executives of local NHS Trusts and primary care groups as well as Thornbury GPs, local councillors and representatives of the NHS’s property services arm.  During the ninety minute meeting each participant explained their stake in the hospital site and the neighbouring health centre and their vision for the future.  Thornbury councillor Shirley Holloway stressed that these issues had been discussed for over a decade and that Thornbury people now wanted action.  Councillor Maggie Tyrrell explained that the current health centre building was inadequate and also that there was a need for more ‘extra care’ housing in the town, which could potentially be accommodated on the site.

In response, Ben Bennett from the South West Commissioning Support Unit said that the NHS would shortly be bringing forward detailed proposals for rehabilitation beds at two sites in South Gloucestershire and that Thornbury would be one of these.   It was agreed that this was an important first step, but that what was needed was an overall plan for the site, bringing together modern new GP facilities, space for outpatient appointments to save people having to travel to Southmead, respite care beds and other health and care services.   Mr Bennett undertook to draw up such a plan in liaison with all those with an interest in the site and to share it before the summer.   The meeting also heard that a £250 million government fund had been made available for investment in new primary healthcare services and that a Thornbury scheme could make a bid for funding once more detailed plans had been worked up.

“We were grateful to visiting minister Norman Lamb for his interest in the issues at Thornbury.  I am sure that his attendance acted as a catalyst in bringing together in one room so many key people with an interest in the site.  A number of people said to me that they thought this summit meeting was a ‘breakthrough’, helping to remove barriers to progress and identifying a clear way forward.  I will continue to work with my councillor colleagues to keep up the pressure to turn the good will at the meeting into effective and timely action so that Thornbury people get the modern healthcare services they deserve”.