MP and councillor condemn BT over broadband 'cover up' 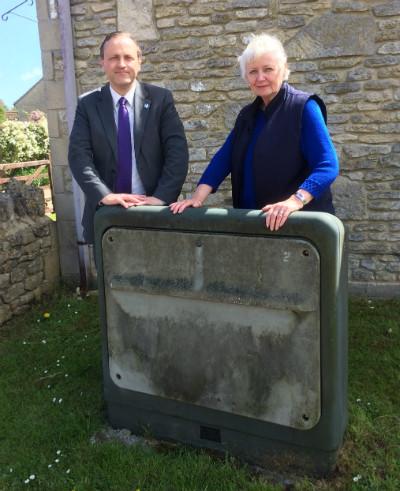 They spoke out after a Freedom of Information request from Steve Webb for more information about the project was turned down on the basis of a confidentiality deal with BT.   At the same time, it was only after persistent questioning that Cllr Sue Hope was informed that a number of the villages in her ward were to be excluded from the planned upgrade.   Now the two campaigners have called for an urgent meeting with BT and South Gloucestershire Council to get proper information for the public about what is planned – and about who will be excluded.

“It is shocking that a project which involves millions of pounds of public money is shrouded in such secrecy.   The public has a right to know now in detail which communities will benefit from superfast broadband and, crucially, who will be excluded.   Sometimes the exclusions are whole communities, but sometimes they are simply groups of households who have the misfortune to be connected to the ‘wrong’ Green Cabinet.   Getting reliable information from the Council has been like trying to get state secrets out of the Kremlin during the Cold War”.

Sue Hope said: “Initial information from the Council and the maps I was shown suggested that most of Cotswold Edge would benefit from a broadband upgrade.   Now it turns out that whole villages are to be missed out.   People have a right to know what is going on and in particular we want to know what the plans are to fill the many gaps that will be left when this programme is finished”.

Steve Webb and Sue Hope are pressing the Council to explore the possibility of villages ‘piggy-backing’ on the broadband connections to village schools when new infrastructure is installed in 2015 and are awaiting a response from the Council.   They are also seeking further information about how many people in areas allegedly ‘upgraded’ under the programme are actually unable to benefit simply because they live too far away from an upgraded cabinet or exchange.