Local charity, The Willow Tree Centre, celebrated its 10thbirthday with a special event at Yate’s Armadillo Youth Café on Friday (7th November).  The event was attended by staff and volunteers of the Centre, Patrons and Trustees of the charity as well as representatives of local councils, churches and voluntary groups and other supporters. 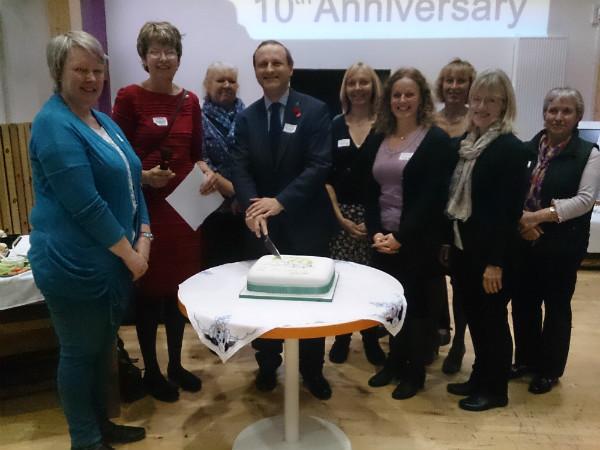 Over the last ten years the Willow Tree Centre has provided support to hundreds of women and their families who have experienced an unintended pregnancy or pregnancy loss as well as providing education in local schools and prisons on sexual health and healthy relationships.  Their specialist services are also available to people with Learning Difficulties.The charity was founded in 2004 by Joy Fussell from Yate, who when working as a nurse at a Bristol Hospital,  identified that there was a lack of support for women facing unintended pregnancy.  The charity leases premises at St Nicholas Family Centre in Yate and sees clients in different venues in the area. They receive funding from a range of charitable sources as well as through providing services to schools, local authorities and other public bodies.

Speaking at the event, Joy said: “I would like to thank everyone who has helped to make this dream a reality.   Ten years ago I saw the need to offer confidential advice and support to anyone in distress due to unintended pregnancy or following baby loss. We have given specialist training to local volunteers who now provide a much needed service in this community. I am grateful to all of our supporters and volunteers who have made this possible”.

The event was attended by the four Patrons of the charity, Gary and Cath Grant from the Entertainer Toy Shop, charity champion Bob Woodward OBE and local MP Steve Webb who has supported the charity throughout and who cut the ribbon when the charity first started ten years ago.   Speaking at the event, Steve Webb said:

“The Willow Tree Centre performs an invaluable service to local people, providing a ‘safe space’ for those in need.  I wish the Centre a long and successful future as it enters its next decade of service, and pay tribute to Joy Fussell, the inspirational founder of the Charity”.