Local MP Steve Webb has joined forces with local residents to raise the issue of poor broadband speeds in South Gloucestershire at the highest levels of Government. 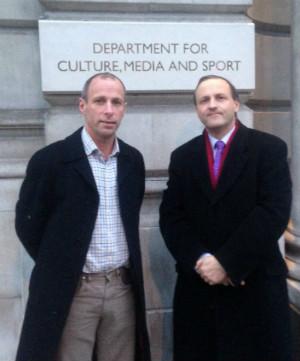 On Monday (2ndDecember) the MP took a group of constituents, including Elberton resident Andrew Watkins, to see broadband Minister Ed Vaizey at the Houses of Parliament.   They explained to the Minister that whilst the investment in upgrading local telephone exchanges was welcome, many communities such as Elberton, Tytherington and Acton Turville could still miss out.   These communities are too far from the nearest exchange or roadside ‘green cabinet’ to benefit from higher speeds, because they will still receive their service over extended lengths of copper cable, even after the upgrade has taken place.   In response, the Minister said that he would look at whether these communities could be ‘reclassified’ as not benefiting from the commercial upgrade process and would therefore potentially be eligible for public funding to improve their position.

“It was good to have the opportunity to speak face-to-face with the Minister responsible for broadband.   Whilst many thousands of my constituents will benefit from improved provision over the next year, I am also very aware of other communities who will continue to miss out.   We will keep campaigning until this issue is resolved”.

“I was able to explain to the Minister that Elberton residents and others are missing out on the much-trumpeted improvements in broadband.   I welcome the positive undertaking from the Minister to look at our case, and I look forward to hearing what he can come up with”.