Post offices in towns and villages across South Gloucestershire have been thrown a lifeline following an announcement this week (Tuesday 16th) in the House of Commons by local MP and pensions minister, Steve Webb. 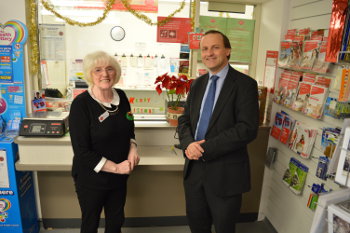 One of the major items of ‘over-the-counter’ business for small sub post offices is the payment of pensions and benefits, particularly to people using the special “Post Office card account”.   This account is accessed using a plastic card and PIN number and was set up some years ago particularly for those for whom a traditional bank account was not suitable.  However, the contract to provide these accounts was due to expire in March 2015 and there were concerns that if it was not renewed it could result in a major loss of business to the post office network.  But this week, Steve Webb told MPs that a new seven-year deal has been agreed between the Government and Post Office Limited which will provide a long-term guarantee of business for local sub post masters.

“I have always fought hard to support local town and village post offices across my constituency, so it was great to be able to use my role as a minister to make sure that the Post Office Card Account is continued for at least another seven years.   This means convenience for local pensioners and others who want to use the post office and a boost for local postmasters who had told me of their concerns if the service were to be ended.”

The news has been welcomed by local sub postmasters, including Sue Baines of Cromhall post office who said:

“The Post Office Card Account is well used by many pensioners who come in to my post office.   I am delighted to hear that it is going to be continuing, as many local people have no other place where they can access their cash easily and with privacy as in a local post office”.

In addition to the handling fee which postmasters receive for each transaction, post offices and shops also benefit from the increased ‘footfall’ as people spend some of the cash which they have withdrawn in the local shop, helping to keep them open.