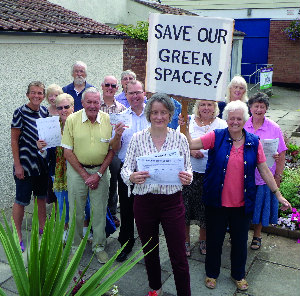 Liberal Democrat councillors have won their campaign to persuade Conservative-run South Gloucestershire Council to protect open spaces it owns in Thornbury and Alveston from being built on. The council had previously refused to include them on a list of land to be designated as Local Green Space, despite Thornbury Town Council agreeing to the open spaces it owns being protected.

"Well over 300 people signed our petition to have the greens at Streamleaze, Osprey Park and Down Road protected from development, which shows just how important these spaces are. We are very grateful to everyone who took the trouble to do this."

"In particular, I'd like to thank Mr and Mrs Dodd, who not only added their names to the petition, but also sent me a copy of the conditions imposed when planning permission was granted for the houses at Streamleaze Green in 1963. They clearly state that a 3 acre open space is required for recreation. I submitted this evidence to the council and with my Thornbury colleagues lobbied council officials to make them aware just how strongly local people felt. I  am delighted that they have now recognised that these open spaces should be protected."

"Greens like the ones at Streamleaze, Osprey Park and Down Road are important open spaces, well used by local people. They were created when the houses were built, so children would have somewhere to play and people of all ages would be able to walk around and meet their neighbours. So we were horrified when South Gloucestershire Council, as the owner of these spaces, initially refused to protect them. Thornbury Town Council had already agreed that the open spaces it owns should be protected in this way."

"We are very relieved that the threat has been lifted from these green spaces. We all supposed that they were there forever for people to enjoy, so it came as a real shock when the Tory-run council said they would not be protected. We are delighted that they have now seen sense.”