Public hustings: hear Steve and the other candidates debate

What happened when young people got to hear all the candidates for the election?

At the start of the General Election campaign the five candidates for this constituency took part in their first ‘hustings’ meeting. Young people attending sixth forms across Yate and Chipping Sodbury, and voting for the first time at this General Election, organised a meeting at Yate International Academy, attended by over 100 sixth formers. What was THEIR verdict on all the candidates for this seat after quizzing them? 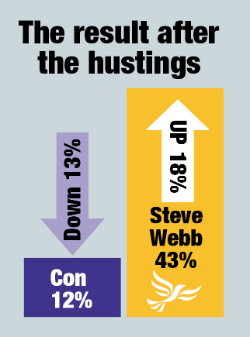 Before the hustings, in a secret ballot the Tories were neck and neck with Steve Webb, with the other parties trailing.
But after a two hour head to head grilling of all the candidates things changed.

After testing the candidates on all sorts of issues, the young people's verdict was clear. THEY want Steve Webb to win - they see him as the best person to help deliver the future they want for themselves and their world.

If you want to hear the candidates or quiz Steve, the public hustings dates are as follows: