Eighteen year-old Zoe Duffner (second left) from Frampton Cotterell had the trip of a lifetime this week when she went to Westminster with her family and met the Prime Minister. 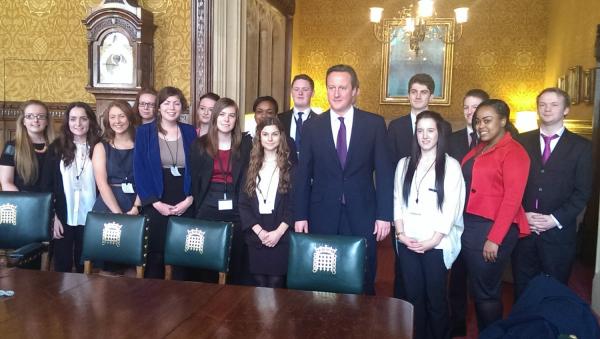 Zoe, who attended Winterbourne International Academy, started work in the Autumn as an apprentice in the office of Thornbury & Yate MP Steve Webb.  Her work involves helping out with office tasks as well as undertaking training in office skills as part of her apprenticeship.  Earlier this year she received an invitation to join other apprentices in meeting the Prime Minister at Westminster, straight after Prime Minister’s Questions.  On Wednesday (5th March) she travelled to London with her mother and grandparents and joined other apprentices working for MPs in a private meeting in the Prime Minister’s office in the House of Commons.   The event was part of the celebrations for National Apprenticeship Week, designed to highlight the benefits to employers of taking on an apprentice, as well as encouraging more young people to consider this route.

Zoe said: “I was a bit shocked when I received an invitation to meet the Prime Minister.  I’ve hardly even been to London, so it was quite something to visit the House of Commons and meet people I’ve only ever seen on the television.  I was a bit nervous but everyone was very friendly and I had a great day”.

“It was great that Zoe had the chance to join other apprentices in meeting the Prime Minister.  I spend a lot of time trying to encourage other employers to give local young people a chance through taking on an apprentice, so I thought I ought to lead by example by recruiting Zoe.  It has worked out really well, and I know that many other local employers have had a positive experience by taking on someone who they can train and who will often become a valued part of their permanent staff”.