The European Commisioner in charge of a multi-billion pound research budget for research and innovation has visited South Gloucestershire to see how EU start-up funding has helped create a centre of excellence for new technology. 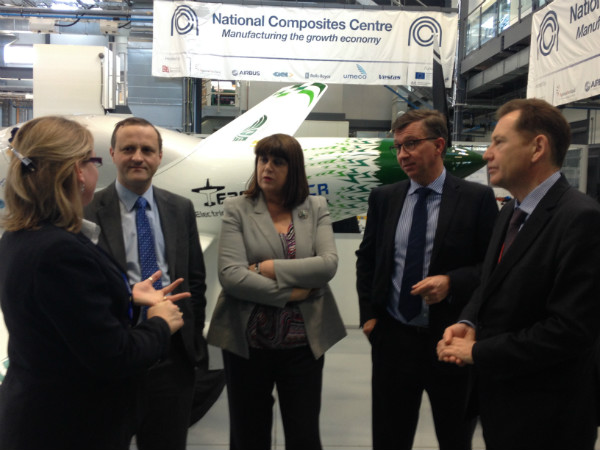 Irish Commissioner Máire Geoghegan-Quinn was in the West at the invitation of Lib Dem South West MEP Sir Graham Watson.  Her visit took in the Universities of Bristol and Bath as well as a tour of the National Composites Centre at Emersons Green.   The Centre provides a place where major engineering and aerospace companies such as Airbus, GKN and Rolls-Royce can join forces to develop cutting-edge technology in new strong and light-weight ‘composite’ materials.  The site is a short distance from the main building of the Bristol and Bath Science Park and provides a focal point for local employment, research and investment in science and technology.  The original project benefited from an EU grant of £9 million and since it started just over two years ago it has expanded rapidly.  During a lunchtime discussion, the Commissioner said that she was pleased that EU funding was helping projects such as this to get off the ground and heard from local employers about ways in which future funding programmes could be even more effective.
The Commissioner was joined by Thornbury & Yate MP Steve Webb who said:

“The West of England has an international reputation as a centre of excellence for research and innovation, and this visit helped to demonstrate what has already been achieved with the help of EU support.  If we are to have an economy rebalanced towards manufacturing and exports, with more jobs outside London and the South East, then initiatives like this are vital.  It was great to hear the plans for expansion, and I believe that many local people will benefit from the work that is being done at the National Composites Centre”.