A class of six and seven year-old children at Charfield Primary School this week had the opportunity to share their concerns with their local MP, Steve Webb. 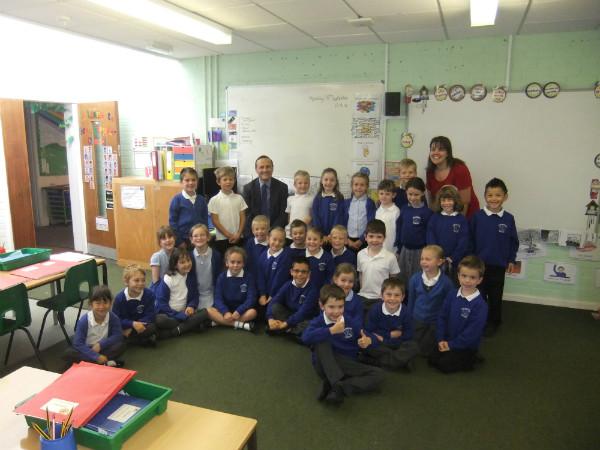 The Year 2 group wrote individual hand-written letters to the MP earlier in the year (when they were still in Year 1), letting him know how they felt about living in Charfield and the things that they would like to see changed.  Requests covered everything from an art gallery to a swimming pool, and the children also raised their concerns about the speed and volume of traffic.  The Thornbury & Yate MP was so impressed by the letters he agreed to visit the school to talk to the children.   During his visit, he explained what a Member of Parliament does, and listened to the children’s concerns.  Since visiting the school he has already been in touch with local Councillor John O’Neill to discuss future plans for improved road safety in the village.

“I very much enjoyed my visit to Charfield Primary School and the chance to hear the children’s ideas.  They were a very bright group and wrote some excellent letters.  I will be writing back to the school shortly to let the children know what actions I have taken in response to their concerns”.

“Our pupils are incredibly proud of Charfield. Our Year 1 children wrote such amazing letters about improving the village facilities that we felt we had to share them with Mr Webb. However when I told the class that an MP had read their letters and wanted to come and talk about their ideas, they were so proud of themselves. The class really enjoyed the visit; finding out about an MP’s job, how people’s ideas change things for the better and, most importantly, how their ideas would be discussed by councillors in the future.”