Thornbury & Yate Liberal Democrats have been joined for their annual constituency dinner this year by Cabinet minister Vince Cable, Secretary of State for Business.  Vince Cable addressed a packed dinner on Saturday evening (16thNovember) at Turnberrie’s community centre in Thornbury after undertaking a visit to a community energy event in the constituency earlier in the day. 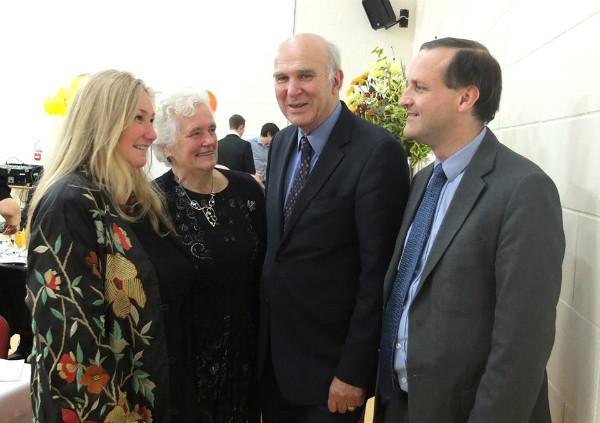 The Minister paid tribute to the work done by local MP Steve Webb as the minister for pensions and also the hard-working local team of councillors and campaigners.  He set out in his speech the positive steps he had taken to support British business, including investment in major local employer Airbus and in science and technology at the Bristol & Bath Science Park.  He also pointed to measures to clamp down on excessive executive pay rises and on the creation of the new ‘Green Investment Bank’ which was recently created and is already lending hundreds of millions of pounds to projects to promote sustainable economic growth.

Speaking at the end of the evening, Steve Webb said:

“Vince Cable is a highly respected minister who was one of the first to warn of the underlying problems with the economy which led to the financial crash of 2008.   Everyone who attended the event was impressed by Vince’s commitment to promoting jobs and growth but also to making sure that there is fairness in the workplace, with protection for workers rights and action on top pay”.

A vote of thanks was given by current constituency chair and Thornbury councillor Shirley Holloway, and the dinner was also attended by incoming constituency chair, Cllr Karen Wilkinson who will take up the role in the new year.

Shirley Holloway said: “It was a super evening and I was there was a really positive mood among local party members and the many guests who came along specially to hear Vince”.