Anger at threat to community space 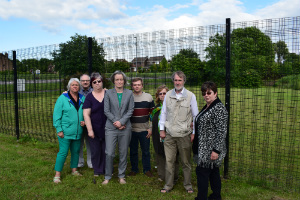 Local people have been angered by plans to build retirement homes on land they were promised would be used for a community building.

The original master plan for the old Sea Stores site included a community arts venue on land at the front of the site. A previous attempt by Taylor Wimpey to build homes on the site failed but Churchill Retirement Living has now announced new plans.

Local councillor Ruth Davis (Liberal Democrat, Yate Central) said, "We have fought hard to stop this land being built over completely, it was meant to be used by the community. There has been no discussion with local councillors about these latest plans."

Liberal Democrat Parliamentary Candidate for Thornbury and Yate Claire Young said, "People in the area have told me there is nowhere else for their children to play games locally without crossing busy roads. Parking on the narrow streets is also a massive issue. It is vital local people have their say in what the land is used for."
The developer, Churchill Retirement Living, is currently consulting on residents' views. The consultation runs until 14th June at www.churchillretirement.co.uk/planning/live-consultations/proposed-site-yate.