Thornbury & Yate MP Steve Webb was put through his paces this week by an ‘eager’ beaver group! Second Alveston Beavers and their leader Emily Fairman invited the MP to come and meet them to answer their questions about how the world could be made a fairer place. 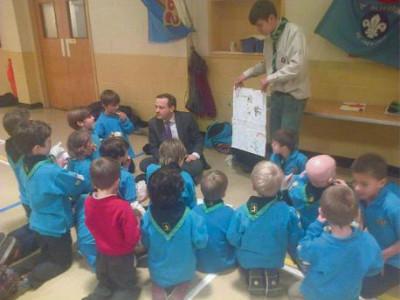 The Beavers had produced posters on the theme and were interested in things like why the world is such an unequal place and who makes the rules which countries have to follow on things like trade.   Steve Webb explained to the group what an MP is and what Parliament does and took questions on a range of local, national and international issues.   Speaking after the event, the Lib Dem MP said:

“I was very impressed with this Beaver group who clearly have a very strong social conscience.   They listened carefully and asked lots of searching questions – it was much more daunting than facing questions in the House of Commons!”.

"We have been exploring issues surrounding fairness and unfairness in the world, and decided we all have a responsibility for the world we live in and the future we want to have.  So we invited our local MP to be grilled by - I mean - to talk with the group about their concerns and thoughts.  It was a really good session, I know the Beavers got a lot out of it and I was proud of them all."